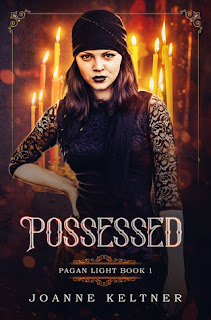 I received an advanced review copy for free, and I am leaving this review voluntarily.


Introduction
Jackie can read the emotions of people and objects, which makes her life exhausting. Due to a major traumatizing event when she was a child that happened in her Russian Orthodox Church, she shies away from her gift and God. But when people in her town begin to act violently, she has to step in with her abilities to help.


Teenage goth friends being friendly until one of them messes up everything by wanting a boy who doesn't want her. Oh, and she tries to get the boy with a Ouija board. Jackie saw a foreboding vision in church as a child, which, arguably, tarnished her life. Mainstream religion also weaves itself nicely through the narrative, but it isn't proselytizing. Her grandmother, who cannot speak English, is very devout. There is also another character who is spiritual, who tries to help. I like how there wasn't a war with who is right (spirituality/religion/science) but it's all there, playing nicely in the sandbox.

The ending was great. The pace was a little speedy, but so much happened and I was eagerly reading to find out what happened. The title becomes a bit of a spoiler, but I forgot about it and I was surprised and hooked.

Jason became annoying. When a boy implores you to love him, even when you say you just want to be friends, run away. I honestly wish she didn't give him a chance. She made it clear she has plutonic love for him, that's it. It's not cute.

I recommend this not only to people who generally like possession or paranormal stories, but also people who like films like The Exorcism of Emily Rose, Paranormal Activity, The Last Exorcism, etc. I wouldn't directly classify this as a horror book, as it is lighter in tone at times, and thus probably has a wider appeal. It was a great read and I hope it gets more readers!

CM Alsop
I studied to be a teen librarian. I am generally always happy, and a good day for me is one where I get to talk about books! Please let me know what you think about my posts and recommend me some new material.